The establishment of the parish can be traced to June 1, 1880, when Rev. John T. Schaffield, celebrated mass for the Sacred Heart community at the home of John and Rosanna Welch. Fr. Schaffield continued to serve as a mission pastor in Oberlin for the next decade. 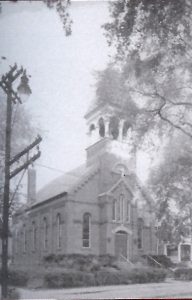 During the 1880s, Oberlin Catholic families organized to purchase property for a parish site on North Main St., opposite Tappan Square. In 1887, they exchanged this land for two lots on South Pleasant and Groveland streets. The cornerstone for the first Sacred Heart parish church was laid on September 4, 1890, at a grand event attended by 1500 participants and observers. Construction of the church was completed in time for a mass on Christmas Day 1890, celebrated by Fr. Schaffield. The first Sacred Heart church was a red brick structure which seated 120. The official dedication of the church occurred on May 13, 1900 when Bishop Ignatius F. Hortsmann celebrated mass, confirmed 19 parishioners, and dedicated the church. Bishop Hortsmann assigned the first resident Catholic priest, Peter E. Dietz, to Oberlin. Fr. Dietz arrived in January 1906 and soon moved into the first rectory erected next to the church on South Pleasant St.

As the town grew during the post World War I and II eras, so did Sacred Heart Parish. Industrial and business expansion, the growth of Oberlin College, the arrival of the Federal Aviation Administration installation, and the National Association of College Stores all contributed to population growth for the city and the parish. The parish population grew from 80 families in 1933 to 125 families by the early 1940s. To accommodate the needs of a growing parish population, in the early 1950s,pastor Thomas A. Kirby acquired ten acres of land on West Lorain St. and began planning to relocate the parish to its present site.

While planning for the new parish site was in progress, Fr. Kirby was transferred and a new pastor, Rev. Martin T. Engelhardt arrived and broke ground for a new education and general purpose building. A church was also erected and on June 28, 1959, another new pastor, Anthony J. Winters, celebrated the first mass in the new church. 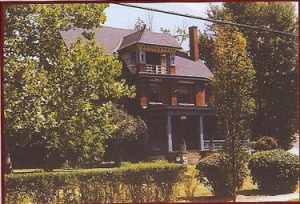 From 1959-1963, the parish continued to use both the new facilities on West Lorain St. and those on Pleasant St. The rectory which was built under Father Dietz’s direction beside the church still stands today on the corner, even though the church is no longer there. The Pleasant St. property was sold with the stipulation that the church building, which held so many memories and had resulted from so many sacrifices of parishioners, would be torn down lest it ever be used for an ignoble purpose. On September 17, 1967, Bishop Clarence G. Issenmann dedicated both the new church and education building.